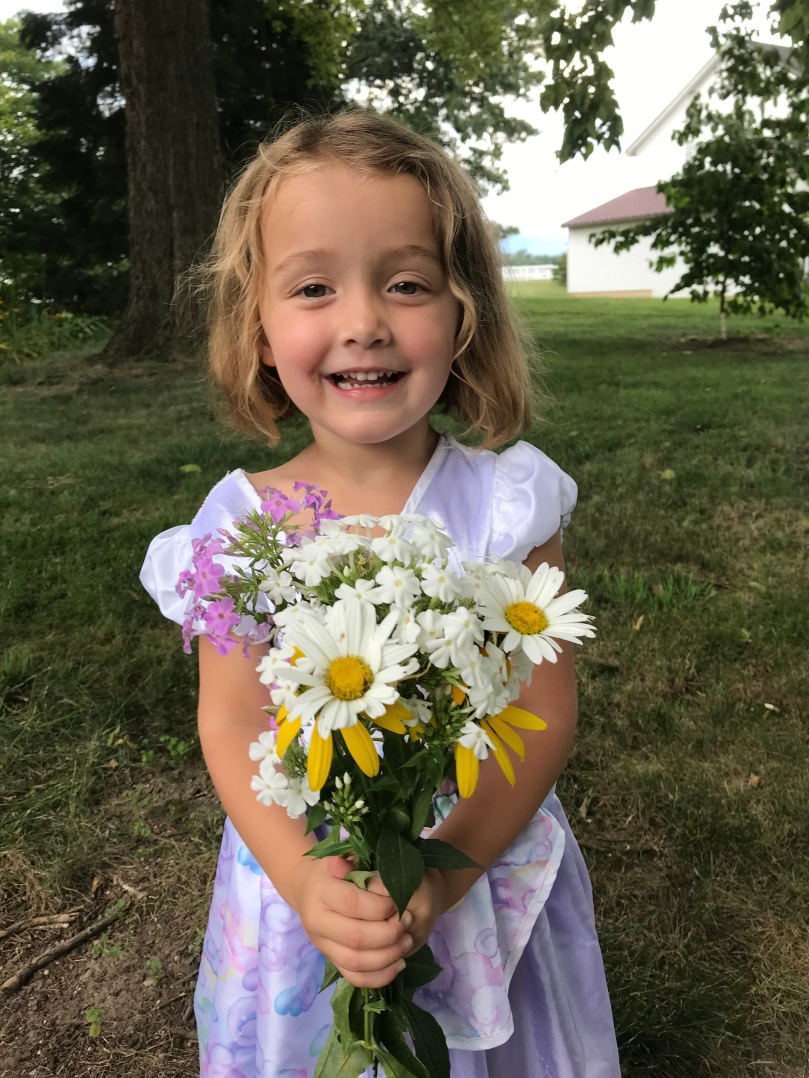 The farm share is in full swing, and, combined with a zillion blackberries I bought off craigslist last week, the bounty has been shaping our eating.

“I stood looking over my damaged home and tried to forget the sweetness of life on Earth.”

Or, if you’re up for a longer passage:

No more diving into pools of chlorinated water lit green from below. No more ball games played out under floodlights. No more porch lights with moths fluttering on summer nights. No more trains running under the surface of cities on the dazzling power of the electric third rail. No more cities. No more films, except rarely, except with a generator drowning out half the dialogue, and only then for the first little while until the fuel for the generators ran out, because automobile gas goes stale after two or three years. Aviation gas lasts longer, but it was difficult to come by.
No more screens shining in the half-light as people raise their phones above the crowd to take pictures of concert states. No more concert stages lit by candy-colored halogens, no more electronica, punk, electric guitars.

No more pharmaceuticals. No more certainty of surviving a scratch on one’s hand, a cut on a finger while chopping vegetables for dinner, a dog bite.

No more flight. No more towns glimpsed from the sky through airplane windows, points of glimmering light; no more looking down from thirty thousand feet and imagining the lives lit up by those lights at that moment. No more airplanes, no more requests to put your tray table in its upright and locked position – but no, this wasn’t true, there were still airplanes here and there. They stood dormant on runways and in hangars. They collected snow on their wings. In the cold months, they were ideal for food storage. In summer the ones near orchards were filled with trays of fruit that dehydrated in the heat. Teenagers snuck into them to have sex. Rust blossomed and streaked.

No more countries, all borders unmanned.

No more fire departments, no more police. No more road maintenance or garbage pickup. No more spacecraft rising up from Cape Canaveral, from the Baikonur Cosmodrome, from Vandenburg, Plesetsk, Tanegashima, burning paths through the atmosphere into space.

No more Internet. No more social media, no more scrolling through litanies of dreams and nervous hopes and photographs of lunches, cries for help and expressions of contentment and relationship-status updates with heart icons whole or broken, plans to meet up later, pleas, complaints, desires, pictures of babies dressed as bears or peppers for Halloween. No more reading and commenting on the lives of others, and in so doing, feeling slightly less alone in the room.”

“I’m just trying to point out how ironic it is that in one of the wealthiest and most privileged cultures in the history of humankind, new humans have suddenly been recast as a dangerous liability and an impediment to happiness. We value abundance everywhere except in fertility.”